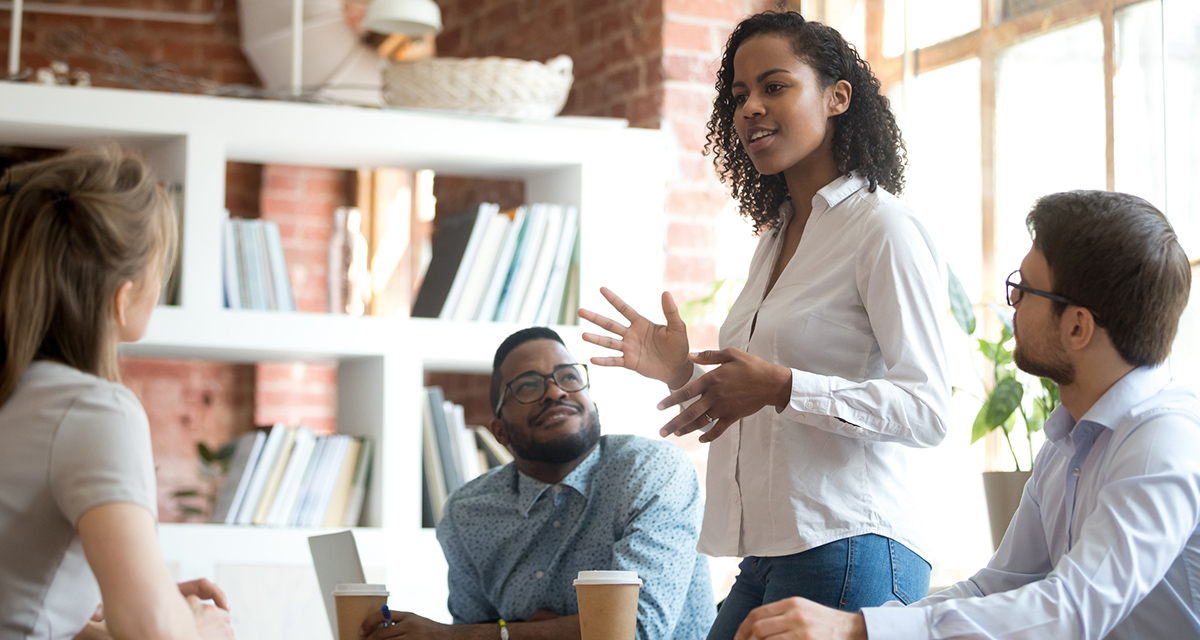 Nearly 61 percent of employees “cover” their identity in some way, Harvard Business Review reported. The concept of covering dates back to 1963, when sociologist Erving Goffman introduced it. Covering is when individuals with known stigmatized identities go to great lengths to keep stigma away from drawing unwanted attention. This can stifle individuality at work.

Maybe you have employees who don’t talk about their kids out of fear that it will make them look less serious about their careers. Or you might have employees who avoid talking about their same-sex partner, as they worry it might make others uncomfortable. It could be a Black woman who wears a weave or straightens her hair to fit into the notion of what “professional” is “supposed” to look like. Or someone with Attention-Deficit/Hyperactivity Disorder (ADHD) trying to sit still in meetings when they might think and contribute better if they took breaks, paced, or fidgeted with something.

One of the best examples of covering in history is Franklin D. Roosevelt, who went to great lengths to ensure that his partial paralysis wasn’t noticeable when he spoke publicly.

The effects of “covering” at work

Covering in the workplace can lead to groupthink, which occurs when individuals suppress their ideas to conform with the group. This can stifle creativity and hinder a team or company’s ability to innovate.

It can also lead to a higher risk of turnover, as employees may feel unfulfilled and anxious in their roles.

A Deloitte survey found that 83% of LGB individuals, 79% of Blacks, 67% of women of color, and 63% of Hispanics reported covering at work. This shows an unfortunate step away from diversity and inclusion and a greater need to build a sense of belonging in the workplace.

When people feel like they have to conceal aspects of themselves for their job, it creates anxiety and diverts attention away from their work.

How can you empower your employees’ individuality at work?

1. Start with the onboarding process.

They studied an India-based call center with high turnover. Employees who work at these types of centers often faced two major stressors. The first is dealing with frustrated customers. The second is dealing with the expectation that they should adopt a Western accent and attitude, according to the researchers. They wondered, “Can turnover be reduced if authentic self-expression was encouraged?”

To test this theory, the researchers randomly assigned new employees to one of three different conditions for orientation. The first group focused on individuality and how each person’s unique perspective and talents could be utilized on the job. The second group focused on the company and its norms and values. The third went through the company’s traditional onboarding process, which focused on skills-training and company awareness.

The orientation group that focused on individuality received reports of greater customer satisfaction and 33 percent higher retention after six months on the job.

The takeaway? When you promote individuality at work, people will rise to their full potential.

2. Take an honest look at your culture.

There’s a big difference between being committed to inclusion on paper and “walking the walk.”

In fact, one study found that nearly 98 percent of professionals worked for companies that stated a commitment to inclusion. But only 72 percent said their company put it into practice.

Consider creating an inclusion council made up of employees who are passionate about creating a place where everyone feels like they belong. Encourage them to speak boldly and honestly about the aspects of the company that might be pushing people to “cover” who they are. Allow the council some measure of authority and tie its feedback back to company measures, such as objectives and key results.

It’s important to note that you’ll only get real, authentic input if you’ve already done the work to create a psychologically-safe workspace. If you haven’t, start there. It’s important to establish psychological safety before asking your employees to bring all of their identities forward at work.

3. Encourage leadership to live their truth.

If your C-suite executives are closed books, your employees will likely follow suit. Encourage your executives to share the aspects of their lives that make them who they are (to the degree that they feel comfortable, of course).

The benefits to this are two-fold: It makes your leaders more relatable to their teams and encourages others to express their individuality at work.

For example, maybe your CEO has a child with autism and they participate in the Autism Speaks walk every year. Consider asking if they’d like to open it up to the entire staff to walk together as a team. It’s a great way to show solidarity — and it might make another employee who also has a child with autism feel like work is now a safe place to talk about their experiences and challenges.

You can encourage people to show up as their full selves. However, shared accountability is necessary to show that it’s safe to do so. Many people refuse to open up about things like culture and sexuality at work, for example, out of fear of harassment. If leadership comes forward and lives their truths, it sets the tone that individuality is to be celebrated — not shamed or hidden.

Sometimes, we might use words that unintentionally cause others to feel excluded. For example, maybe you start every call by saying, “Hi, guys!” You might be using “guys” as a synonym for “everyone,” but everyone on the call might not be a guy. Major publications are also starting to use the word “they” to replace pronouns such as “he” or “she,” to be more inclusive of people who don’t associate with either gender.

At Aduro, we’ve even included a line in our email signatures to respect people’s preferred pronouns (e.g., “they/them,” “he/him/his,” or “she/her/hers”). The Linguistic Society of America offers a great set of guidelines for inclusive language. You can leverage this when writing job descriptions or drafting internal communications.

5. Rethink the format and length of your meetings.

Companies have often defaulted to brainstorming new ideas the same old way: gathering everyone in a conference room. However, during group brainstorming, you might hear from the same people every time, as they’re the most vocal. We get influenced by the ideas of others instead of allowing ourselves the freedom to explore a different path. Additionally, employees who have neurologically-diverse needs may struggle to sit through an hour-long meeting.

Consider presenting the next challenge to your employees during a team meeting. Then, let them develop solutions on their own. Bring the group back together and allow each person to talk about one of their ideas for a few minutes. Once the initial brainstorming is done, you can cut the meeting time back to 30-45 minutes. And get more from it. It’s a great way to get fresh ideas that represent your employees’ individual and collective strengths.

You could also encourage employees who struggle to sit through long meetings to do what they need to do. Letting them take a break, pace, bring a fidget spinner, or any other action can help them contribute to their full potential.

6. Consider how your dress code can promote (or stifle) individualism.

Many companies use their dress code as part of their brand image. Their employees are the “face” of the company. They want to have some control over how the public perceives them. In short, they want their employees to look “professional.”

The big problem is that the “logic” used to define what is considered “professional” is often just masking unconscious bias.

For example, in 2010, Chastity Jones went in for a job interview at a call center. She wore a blue suit and short dreadlocks. She met all of the job requirements and excelled in the interview that she landed the job on the spot. However, when an HR manager asked her to fill out the paperwork, she was told that the company couldn’t hire her with dreadlocks. The Equal Employment Opportunity Commission (EEOC) took the case all the way to district court. Ultimately, the district court — and later the Court of Appeals for the 11th Circuit ruled in favor of the company.

Often, what the broader society sees as “normal” is, in fact, subjective. And because professional places excluded people of color for so many years, what’s often considered “professional” or “normal” is defined through those who were more common in the workplace: white people.

It’s time for companies to consider moving toward an inclusive dress code to encourage self-identity and increase engagement.

How can organizations do that? By being less restrictive in their dress-code policies.

At the American Society for Surgery of the Hand, the dress code is summarized as simply: “No nudity.” The same company also allows people to work anywhere in the office versus being confined to a designated desk space. (There’s even Wi-Fi on the rooftop.) This allows people the freedom to come to work as themselves — from the inside out.

Individuality at work allows people to celebrate what makes them great — and use those talents to make the company great, too.